I miss seeing celebrities! Granted, they never changed my life... but it was exciting to bump into them on the streets, restaurants, bars, theatres & have exchanges with them. Of course there's lots of filming that constantly goes on in NYC... so it's a daily occurrence. But I miss those exciting exchanges!!!
While living in NYC, I never became jaded by running into celebrities. In fact, I felt more alive & always had a great story to tell friends later that day. On the downside, if a stars trailer was parked outside your apartment window, the noise & fumes from the generator were annoying- but that's a small price to pay! I have yet to meet one Suburbanite who actually saw or met a celebrity in Suburbia. 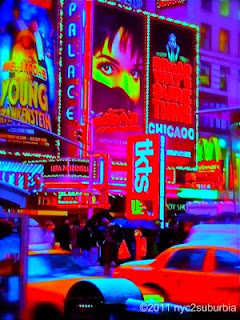 It goes without saying that in NYC, you can do something exciting every night & never be alone. There are tons of shows to see, hundreds of restaurants that stay open late & always people on the streets. Nonstop excitement, diversity & life!
The most "exciting" thing in Suburbia is shopping! There are super sale days, early morning door busters, coupon cutting sale days & even late night shopping sales... (I am guilty of the later, but haven't seen more than a handful shop at that time of night). After all, its "too late", or they're "getting ready for tomorrow" or watching reality shows in real time, rather than dvr it & watch it at a convenient time. wtf???
It's a very different mentality in Suburbia. Another "exciting" thing to do is sports!!! Well, sort of, if you consider WATCHING it on tv rather than actually participating in it. But an extremely "exciting" thing would be to get a bunch of junk food on a "super sale" AND "play" (I mean WATCH) sports for hours! Yeehaww!!!
Okay, okay... to each his own, but I am just comparing what excitement is in NYC vs Suburbia in general. Hands down NYC is & always will be exciting... for me. I live for my next visit to NYC where I am not consumed by loneliness & dependence on a car.
I realized the difference between "excitement" in Suburbia & NYC tonite in a restaurant when the waiter asked if I was Robert Downey Jr & I just smiled coyly & left the restaurant quickly, exiting like a celebrity (hahaa). As I ducked out, I  felt like maybe I made the waiters nite a little "exciting". At least I knew I wasn't going shopping at some unnecessary "sale" or passing out on the couch from the exhaustion of "watching" marathon sports while gorging.
I went home & checked my airline rewards miles. How soon before I could visit NYC - MY city of excitement? Not soon enough... not soon enough, but maybe... if I could be a double for Robert Downey Jr in his next movie! That could be exciting! And what if in his next movie he played the role of a Suburban shopaholic who watched sports nonstop on the couch. Wow, that would be a trip!!!

Thanks for visiting my blog and please leave any comments, suggestions or what you think about NYC vs Suburbia. I'm looking forward to hearing from you soon.
Posted by nyc2vin at 12:25 PM