Yes, Virginia, There Are Four Seasons

Being a native New Yorker, I was somewhat surprised that there were four seasons here in Northern California! The weather here does not have the extremes like New York does, so I'm always surprised to hear native Californians complain about their Winter. If they only knew what is is like to experience an East Coast Winter! It can be cold, bitter & nasty... no names mentioned! haaaa 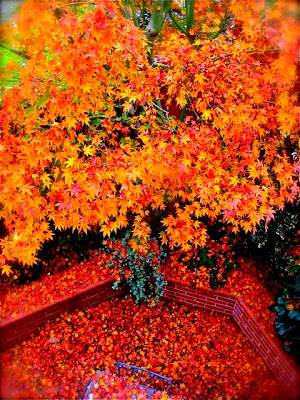 When many of my friends & family from back East talk about the weather here, the majority of them think that California (ALL of California) is always warm, sunny & has palm trees...  Well, FYI, it isn't always warm & sunny & it doesn't only have palm trees! We also have four seasons here in Northern California. The weather isn't as severe as NYC, but there are still four seasons. (Wow, live & learn, I guess).

Being the non stop complaining New Yorker that I am, I have to say that the weather here ain't so bad. Okay, okay... I still wish it were warmer a little longer & there was a little less rain, but come on, I gotta complain about something!!! Oh, did I mention the shorts & flip flops that still go on parading here in the middle of winter? Well, that's another story...


Please leave some feedback or comments about the pros & cons of living in suburbia vs. the big city. Have a good day & thanks for checking in.

Another "Normal" Day in NYC

Just another normal day for us in NYC and it went something like this...

We met a good friend for lunch in our neighborhood, the West Village, (walking distance of course), & then proceeded uptown to the theatre district in a cab. We generally, do not travel by cabs because they are expensive & can take longer than subways, buses or walking. But being under a time crunch & our friends insistence, we cabbed it. 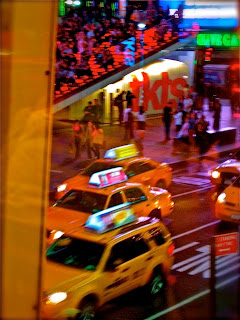 We must have been deep in conversation before we realized that our cab driver had tourette's syndrome, because he was directing traffic & moving cars out of his way all by using his hands! OMG!!! It was scary/funny at the same time. The three of us were a little nervous & sat on the edge of our seats, since the ride was somewhat slippery as the snow/hail was coming down. The cab driver finally jammed on the brakes & banged on the partition to let us know we were at the theatre. We were seeing a matinee on Broadway & got there with a few minutes to spare. Bursting with laughter as we left the taxi realizing what had just happened & that we survived it.

Getting inside the theatre, the usher told us to wait for a moment & we thought, "What now"? But the usher explained since there was a snow storm coming, a lot of seats were available & we were fortunate enough to get moved to house seats (4th row center)... we paid for balcony seats! Wow, how great. The show was an unexpected pleasure & it put us all in a great mood... we were actually humming show tunes as we left the theatre. The show was "La Cage Aux Folles", not necessarily our favorite show, but we decided to take our friend as a belated birthday gift. The show is overly stereotypical in theme, but this production was a welcome surprise with Kelsey Grammer & Douglas Hodge playing the two male leads.

After a quick early dinner at Bus Stop Cafe, in the West Village, where the waitstaff & managers all know us, we left for an evening Broadway show. (Oh, did I mention we both received a glass of wine on the house because they missed us)? This is a great neighborhood spot with very reasonably priced, delicious food. Friendly staff, nice lighting, great food selection & in the middle of the West Village! (Was that a plug for Bus Stop? Sure sounded like a thumbs up to me). Okay we then headed uptown via subway as the snow continued to come down. 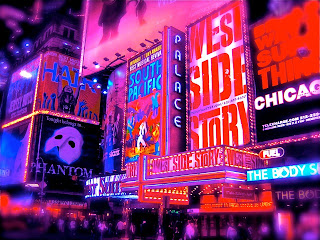 We went to see "Spiderman" on Broadway with all the buzz & hype attached to it, the show is still in previews & has gotten a lot of press. So, we saw the show & it was pretty amazing. The second act is still finding its way, (even though we couldn't find it at times), but it was really exciting to be able to part of this visually stimulating show! Grant it, we went because of all the hoopla surrounding it & thought "When in Rome", but also as a great topic of conversation when we're back in the burbs. It was visually stimulating & sometimes cirque de soleil like. "Spiderman" has a thin story line & not many hummable tunes... but it was a spectacle & worth seeing... especially at a discounted price. (Checkout Broadway Box or Playbill or just google Broadway discounts)! Another NY tip... you never pay full price for a show. When we left the theatre, there was a full white out snowstorm going on. It was fun, we were laughing, taking pictures, videos & acting like kids. But then again, this is just a typical fun filled day for us in NYC! (Minus the snow... that was just icing on the cake).

Okay, this is how we live in NYC. How can you find anything close to that in suburbia? You can't! Okay, I can't... not yet! But, I wanna try. I know there's just gotta be more than I'm experiencing up till now...(Cue the music "There's Gotta Be Something Better Than This"). So, please if anyone knows... post a comment or suggestion. If there could even be two shows playing in one day that were Broadway quality, that would almost be enough for me! There is The Marin Civic Center which could have great entertainment booked there, but we haven't seen anything booked there yet! What's up with that???
Oh by the way, I could probably do without the "special" cab ride. Once was enough... at least for this week!

Any ideas or suggestions for things going on out here in Marin, please leave a comment/suggestion & thanks again for reading. I'd really love to hear all your feedback.
Posted by nyc2vin at 1:30 PM No comments: 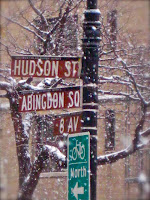 Okay, I am trying to be objective... but as I sit here at my laptop in our old building in the heart of the West Village in NYC, I realize that this is where I belong! As I look out onto the streets, hear the traffic, see the cars, watch the snow falling down & even feeling cold, I just feel alive in this city.


What is wrong with me? It is COLD and everyone in NYC is constantly complaining about the cold and the snow and the yadda yadda yadda. That's what New Yorkers do and they do it well - complain! (I can say that because I am a native New Yorker and have mastered the fine art of complaining). But come on people, NYC is full of life and non stop energy... good, bad, chaotic, frenetic and always diverse, dramatic and different. 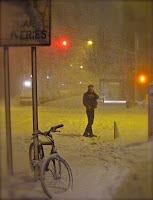 This visit back to NYC reminded me of the one thing that I never liked about NYC and that was the winter weather. However, this time the weather didn't even bother me as much as it has in the past. It seemed like it was kharma or a test of my love for the city, which of course won out! I was so glad to be out of suburbia! What does that say about me? I'm not sure yet, but I am not looking forward to returning to the car driving sleepy suburban mentality where life stops at 8:00 pm and public transportation is thousands of miles away.


Check back with me as I continue to try to survive in suburbia with style, $ense & sanity and a lot of humor... and please leave me your thoughts or comments.
Posted by nyc2vin at 4:51 PM 1 comment: