Bullied in the Burbs

Bullying is a very hot topic right now. There are many anti-bullying groups out there & I think that's great! However, I'm from NYC & I grew up learning how to deal with bullies - that's just how it was. Maybe it wasn't healthy, but I learned many coping skills & defense mechanisms to survive. I'm sure it screwed me up in many ways, but how many totally well adjusted people do you know?


This is not a "poor me" story, just the truth... my truth. I was bullied for many reasons over the years as I was growing up. I survived it THEN, it was just another painful part of growing up. I never even considered NOT surviving it. But being bullied NOW at my age is a whole different story.

I could not believe this happened to me out here in calm, perfect, beautiful Suburbia - but it did! As my husband & I were driving into the mall (okay, it IS Suburbia after all) a crazy hyped up young woman cut in front of our car, jammed on her breaks & yelled a bunch of hateful remarks. She was driving alongside us for awhile... 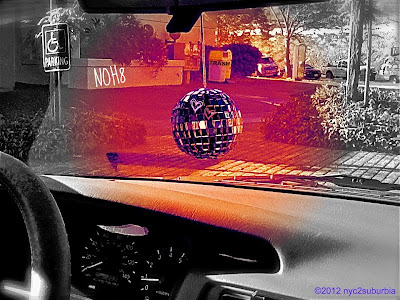 The Bully: "Why were you two guys staring at each other instead of the road? Or did you have to look at your disco ball & watch it shine?" (We have a disco ball hanging from our rear view mirror.) "That's what I HATE about people like you."

Me: "Really? So you're telling me you hate ALL Gay people because WE are ALL the same, we LOOK at each other & we have a DISCO BALL? "

All the rage I held down since I was a child started to come out (unlike me who was always out.) I was NOT going to have someone else speak to me or my husband in this mean hateful way. I knew I should realize where this was coming from (a crazy person) & I should forgive & blah, blah, blah - more PC BS. But that ain't my style & it'll probably never be my style. PC is boring & bland... it lacks balls!

Me: "What the hell are you talking about you crazy bitch? I think you have a serious problem & you better get the f**k outta here NOW, before I call a police & report you. You AND your hateful, bigoted, small town attitude. I'll have your skinny crazy cracked out ass hauled down to the jail before you can even check your ugly face in a mirror which you obviously don't own. Who the f**k do you think you are? Are you for real?"

Her response was that I had "nerdy shoes" & she sped off as I started to call the cops. (BTW, I have never had nerdy shoes, remember I'm Gay!)

I was shaking & could not believe this happened. I cried & all those childhood memories returned. Phewwww! I finally let it out (actually, I did hold back - believe it or not.) I was surprised I had so much anger built up. I guess it was all those years of being teased about my weight, about being Gay, about dressing differently, about not playing sports, about not having girlfriends, about being different. The list goes on, but that's life... you deal with it.

Maybe NYC gets such a bad rap because most of us are just protecting our inner child & appear tough. Who knows, it's just a theory. But that's exactly what I did in my response to this bully. For me, a lot of my repressed feelings finally exploded outta my mouth while living here in Suburbia. In Suburbia, the one place I thought was suppose to be totally cool with anything, ya know "laid back, mellow" - it IS California after all. BS! Hate IS hate & can be found anywhere & at any age. Hate always hurts & leaves scars. Hate is never acceptable.
Posted by nyc2vin at 10:59 PM 1 comment:

My 9/11 Memory - NYC Coming Together After Being Ripped Apart

You can say what you want about New Yorkers (& many people do) but in bad times we stick together. We show what we are made of & our true colors shine! There are certain images you can never erase from your mind, the visual is forever frozen. That's how 9/11 was for me. I was watching the morning news on TV when I first heard about the attack. I ran upstairs to the roof to see what was going on since I had an unobstructed view of the towers. It was unclear what was happening, no one really knew yet. All I could see were the bright orange flames billowing out of the Twin Towers. At first, I thought it was orange tarp blowing in the air - no way could this be happening so close to my home. There were a few other people on the roof that morning, but we were all disbelieving quiet spectators not sure what to say or do. I took a few photos & ran downstairs to my apartment to get updates on the news as it unfolded. Nothing was making any sense to me, this is New York City - we are invincible! 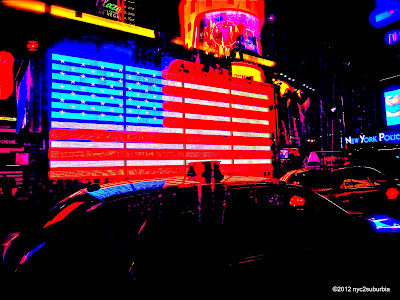 I feel most people can be at their best during difficult times... especially New Yorkers. We became more close, more friendly & more caring toward each other than any other time I have ever experienced. We all rallied together, we are NYC, dammit! We were all highly emotional walking around with tears in our eyes & eager to help each other. Nobody was ignored, you felt this unifying energy... it was amazing! We were sharing the horrific fear of the unknown with each other - but we were all connected. People just stopped, talked & listened. It was amazing - coming together after being ripped apart.

I remember all the missing people flyers posted on every street corner. I remember strangers asking if you knew anyone in the towers. I remember being asked to show my ID when crossing certain streets to prove I lived there. It was almost like being in a V.I.P club that you didn't want to be in! I remember being at my favorite Mexican restaurant that was around the corner from the West Village Firehouse. All the firefighters were taken from us - they were the first responders & our first heroes. To honor the firefighters, at 7 pm there was a prayer vigil. All of us in the entire restaurant gradually got up & walked to the firehouse - some with candles, others with Margaritas, some of us with both. We made a toast & said a prayer for those brave men. Powerful stuff like that you never forget. The intense feeling of community & caring... it surrounded us.

I remember walking down to the Hudson Highway night after night cheering the crews that drove down to help at Ground Zero. We showed our support by applauding, whistling & waving - some even with homemade signs of gratitude. We lined both sides of the highway & we were strong in numbers. I remember watching the vehicles heading downtown shiny & clean, while those returning uptown were covered in ash, debris & who knows what kind of toxic chemicals. I remember the smell of the terrible air, the sight of those ashes, the sound of the piercing alarms. I cry just recalling it... maybe that's why I've tried not to think or talk about it. It's difficult to face those feelings, but I remember, I was there!

I remember the caring & neighborhood feeling that I experienced during this time - it's almost what I miss most about NYC. I thought I may get the same feeling or even more by moving out to Suburbia. I haven't found it yet & I still miss my city. So you can say what you want about New Yorkers... I know firsthand & I remember.
Posted by nyc2vin at 10:01 AM No comments: