My First Beach in California

Most of my East Coast friends have a preconceived idea about California. California, ALL of California, is full of palm trees, nonstop sunshine, warm weather & many other clichés that go with it. Well some of them are true, but...

I have been living in a suburb of Northern California (near San Francisco) for almost three years & the weather (for me) is not that much different from NYC. I still wear scarves & gloves, but it's more of a fashion accessory - besides it's a car culture! Seriously, there are differences, but both climates are similar to me... a little thing called global warming, ya know. There are many micro climates & the temperature does fluctuate from the morning until the night. There are frosts, freezing cold days & snow only in the mountains. There aren't many humid days, but we do have them occasionally. I still complain that it gets cold here & how could it? After all, I am in California!!!


I am happy to say I finally did go to a beach recently. My first beach experience since living out here! I knew there were beaches, but I was starting to ask where do they hide them? We took a ride to Stinson Beach riding upon the winding roads that eventually lead you to the beach. Wow! My first California beach! It was beautiful & just a little chilly. I almost felt as if I was back home with my memories of the East Coast beaches - Jones Beach, Orchard Beach & Provincetown in Cape Cod. Okay maybe it looked a little more like Race Point in Cape Cod & less like Orchard Beach in The Bronx, but my point is that it was relaxing & familiar & I loved it! 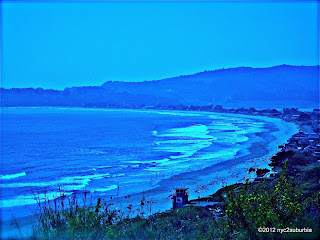 I was on a beach, I was happy. I was in California, but it could have been anywhere that I wanted it to be and of course my accessories were in tact.

Thanks for visiting, spread the word about my blog & "Follow" me already! Feel free to leave your comments... Whaddya waitin' for?