Relaxing in Suburbia ... Not for me ! 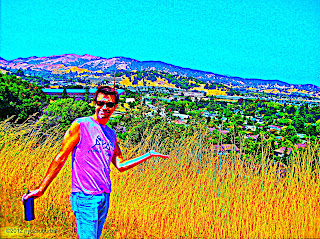 I was walking up to soak in the jacuzzi for my aching back. I needed to relax & I was in pain. Sometimes my only relief comes from soaking in the jacuzzi for a few restful minutes. Okay, so hopefully there won't be any deer, coyotes, killer crows or a ton of spiders with their enormous webs that I'll encounter on the way to my oasis.

I relaxed in the jacuzzi for a few minutes & felt somewhat relieved. The vibrating heated water was doing its thing! Thank God!!! As I start to get out, I see a bee on my arm! I scream & try to get it off my arm - calmly!!! Ha, that's a laugh, I am hardly ever calm especially around animals out in the wild. And yes a bee is a wild animal to me (I even have a cousin who let go of her baby carriage because a wild bee was after her)! My entire body tensed, I was no longer relaxed. I repeatedly cursed & retreated back in the jacuzzi trying to flee from this bee who wanted me badly. I slowly got out of the jacuzzi & almost fell back in when another bee was on my back! WTF? I try to put one flip flop on & hobble trying to swat the killer bees & cover the jacuzzi all at the same time. 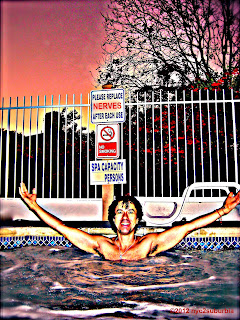 BTW, there were two elderly ladies lounging by the pool. I think they thought I was possessed or crazy as I left the jacuzzi area cursing & hobbling. I ran out of there, barely replacing the jacuzzi cover, I was tensed up again, in pain, soaking wet & I started to laugh out loud. Once again down the path this terrified city guy was on guard for the "lions & tigers & bears" of Suburbia. I was in as much pain as before I started. Ahhh, the joys of relaxing in Suburbia... really? Whatta joke - not for me!

Thanks for visiting & please spread the word. "Follow" me already! Whaddya waitin' for?